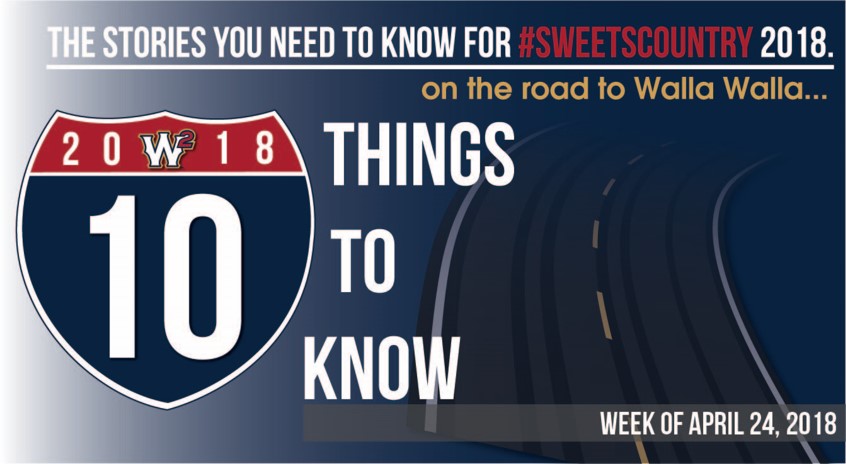 The Walla Walla Sweets home opener is rapidly approaching! Check out how our players past and present performed last week with the latest edition of “10 Things to Know”!

1. Stop us if you think you have heard this one before… Jalen Garcia (OF) had a monster weekend helping to propel Montana State University Billings to a four-game sweep of Concordia University. Garcia went 8-for-18 with four doubles, a triple, a homerun, seven runs scored, nine RBI, two walks and a stolen base. He also supplied some late-game heroics for the Yellowjackets, as he drilled a double into the right-center gap to give MSUB the walk-off victory in extra innings in the second game of the series on Friday. (HIGHLIGHT)

2. Nate Ostmo (IF) had a great series for Dartmouth College over the weekend despite the Big Green dropping two of three games to Yale University. In the series, Ostmo went 5-for-10 with four runs scored, an RBI, two walks and a stolen base.

3. Santa Clara was swept in a three-game series against Washington State University over the weekend with several Sweets contributing for both teams. For Santa Clara, Jake MacNichols (C) went 3-for-12 with three runs scored, a double, a homerun and an RBI. For Washington State, Danny Sinatro (OF) appeared in two games and went 2-for-6 with two runs scored, two RBI and hit an inside-the-park homerun. (HIGHLIGHT)

4. Matt Richardson (IF) and the University of Utah were both held in check as the Utes were swept on the road in a three-game series against Arizona State University this past weekend. Richardson went 2-for-10 in the series with a double and two runs scored.

5. Central Washington University was able to win three of four games against Northwest Nazarene University in another Sweets-laden series over the weekend. Mitch Lesmeister (IF) cooled off for Central Washington, going hitless in the series but still drew two walks and scored two runs. Zach Penrod (Utility) continued to produce for Northwest Nazarene, as he went 4-for-10 with four runs scored.

6. In another Ivy League matchup over the weekend, Harvard University won two of three games at home against Brown University. Jake Suddleson (OF) appeared in all three games for Harvard and went 2-for-13 with a run scored, an RBI and a walk.

7. UCLA commit, Jack Filby (Utility) has been getting back on track as of late for the C.K. McClatchy High School baseball team. Filby carries a .333 batting average with three doubles, three triples and 15 RBI through 18 games this season.

8. While Southern Illinois University was swept in a three-game series against #25 Tennessee Tech, 2016 Sweet Connor Kopach (IF) stayed red-hot at the plate. He went 4-for-13 in the series with a double, two runs scored, two RBI and a walk. Now on the season, Kopach is hitting .354 and ranks in the top-10 in nearly every offensive category in the Missouri Valley Conference. Just recently, he was named to the Brooks Wallace Award Watch List, which recognizes the best shortstop in college baseball.

9. Former Sweet Hayden Duer (C) had a whale of a weekend for California State University, Monterey Bay, helping them take three of four games against Sonoma State. In the series, Duer went 7-for-15 with a double, two homeruns, five runs scored, seven RBI, five walks and now carries a .301 batting average on the year.

10. Orange Coast College took two of three games against Irvine Valley College last week and former Sweet Coby Kauhaahaa (IF) performed well in the series. He went 5-for-14 with a run scored, two RBI and is batting .333 on the season.