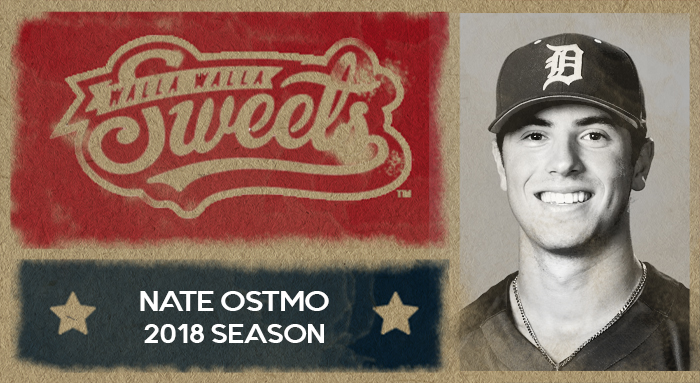 Walla Walla, Wash. – From California to New Hampshire, the Sweets have added another pair of talented players to their roster. Nate Ostmo (IF/Dartmouth College) and Jake MacNichols (C/Santa Clara University) will take to the field for Walla Walla in 2018.

“I had a great experience last year in Ohio playing in the Great Lakes League,” Ostmo said. “One of the things that I wanted to do was to take my experience from last year in a good league and raise the bar, go to a more competitive league and play in a place that’s closer to home where I can be close to family. Playing in Walla Walla in the West Coast League satisfies all of those things.”

“I was talking to one of my coaches and we decided that the WCL was a great league for me to go to,” MacNichols said. “One of my old high school buddies played for the Bellingham Bells and he said it was a great experience and that I should try to play in the WCL.”

Ostmo is from Portland, Oregon and attended Lincoln High School where he was a star-studded athlete. A four-year letter winner in baseball, he served as team captain his final two seasons. His junior year he was named Portland 6A Player of the Year and his senior year he helped lead his team to the Portland Interscholastic League Championship.

“I had a great experience at Lincoln High School,” Ostmo said. “I was under Coach Rob Herder for three years before he left and then I was lucky enough to have some really good young coaches, CJ Watson and Michael Blake, come in and take over the program and they’ve done a great job ever since.”

Ostmo is now a junior at Dartmouth College and said he was drawn to the school because of the excellent academics and how much he loved the campus during his recruiting visit. In his first two seasons playing for the Big Green, Ostmo batted .260 with one homerun, four triples, and 23 RBI. Playing primarily at shortstop, he has 130 assists, 65 putouts, and an .899 fielding percentage.

While the team has struggled at times to string together winning seasons, Ostmo said his experience has been about so much more than that. He feels the relationships that he has built and the people with which he has surrounded himself with will go much farther than the wins and losses of his college baseball career.

“When I think about the baseball program here as a whole, [I think about] the high character and caliber of people that they bring in,” Ostmo said. “When you talk about baseball, you can get lost in wins and losses, but at the end of the day I’m glad to be here because my teammates here are going to be my friends for life. My experience has been defined by my teammates and the individuals that create the program, not so much the winning and losing.” 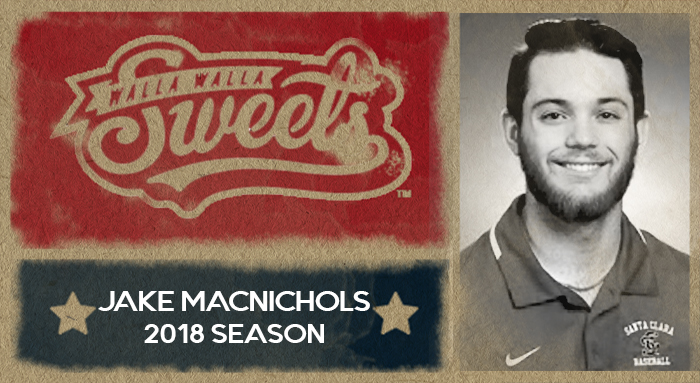 MacNichols is a native of Napa, California and attended Vintage High School where he was a highly touted prospect. He was invited to participate in the Area Code Games for the Oakland Athletics in the summer of 2015 and was tabbed by NorCalPreps.com as No. 31 in its Scouting Report’s Baseball Top 50 in 2016. Over his final two seasons with Vintage, MacNichols compiled a .348 batting average with 36 RBI, 16 doubles and four homeruns.

“We had a great group of guys there, a really tight group,” MacNichols said. “At one point during my junior year we had eight guys committed to play D1 baseball in our lineup, so that was pretty cool.”

Now a sophomore with Santa Clara University, MacNichols posted six homeruns and eight RBI in his first year with the Broncos. Behind the plate, he recorded 229 putouts with a fielding percentage of .974 and threw out 13 baserunners attempting to steal.

The team struggled mightily last year, finishing the season with a record of 13-40. Then Rusty Filter came in and took over as head coach of the program, brought a new coaching staff along with him, and MacNichols said that has completely changed the direction of the team.

“The culture we have now within the baseball team is unreal,” MacNichols said. “It’s always been strong but now that we’re winning with each other – it’s unreal – and I wouldn’t want to be anywhere else. It’s basically the same group of guys making an impact this year as last year, which shows you what a new coaching staff can do. They haven’t changed anything mechanical, it’s all on the mental side of the game. We have the talent and ability to do it, so it’s just the mental part that they’re helping us out with.”

Both players expressed their excitement in getting out to Walla Walla, meeting the talented group of players the Sweets have put together, and having fun while competing for a WCL championship.

“Each summer team has a fun identity,” Ostmo said. “We’re all there to get better and develop, but I’m looking forward to having a good time with the guys while playing baseball at the same time.”

“Getting to know a whole new group of guys with everyone being from different sides of the country, I think that’s the best time,” MacNichols said. “When it turns into the dog days of summer and it starts getting tough, when you start winning that makes it even more fun.”