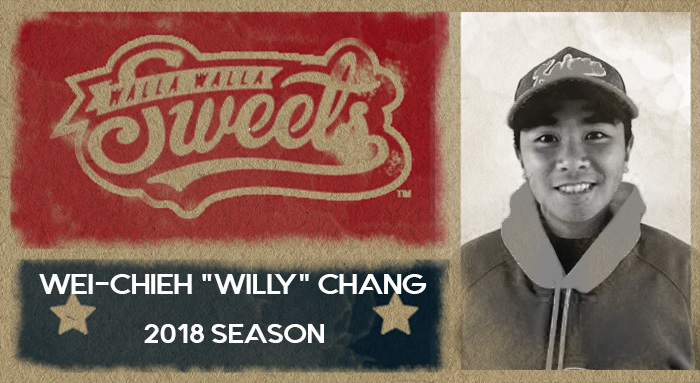 Sweets team president and owner Zachary Fraser expressed his excitement for having Chang as a member of the team this upcoming season and looks forward to incorporating him into the Walla Walla community.

“We can’t wait to introduce Willy to the Walla Walla Valley and vice versa,” Fraser said. “His talent will play well in the league and it will provide a great cultural opportunity for our staff, players and fans. #SweetsCountry has shown remarkable love towards every player to ever wear the Sweets jersey and I know that Willy will have a similar reception.”

A native of Taipei City, the capital of Taiwan located at the northern part of the island, Chang went to Ku-Pao Home Economics and Commercial High School where he honed his skills on the baseball diamond.

“It was very competitive,” Chang said of his time at Ku-Pao. “Everyone got along with each other very well.”

Chang first visited the United States as a young athlete playing baseball for the Taiwan National Team in the 2011 PONY League Baseball World Series hosted in Washington, Pennsylvania. His team came up just short, losing in the championship game, but Chang said he thoroughly enjoyed the experience and going to the American shopping malls and outlets.

The talented young catcher is currently a junior at Kainan University, a private university located in Luzhu District, Taoyuan City, Taiwan. He said he chose to go to school there because of the opportunities it would afford him to advance his baseball career.

“Kainan provides the chance for each player to play on the field,” Chang said. “The school also has a very strict training system which allows us to improve significantly while there and every player on the team is very aggressive and desires to play professional baseball.”

Chang learned about the Sweets online and from a friend who played in the WCL last year. He said he is looking forward to meeting his new teammates and playing at some of the amazing venues featured in the WCL.

“I learned about the Walla Walla Sweets from the WCL website and also from my friend, Po-Hao Huang, who played for the Victoria HarbourCats last year,” Chang said. “This is my last summer in college, so I wanted to try something more competitive and play against better and stronger players so that I could improve myself. I believe the Sweets are the right team [for me to be able to do that].”

Sweets manager Frank Mutz said he is excited to add Chang to a growing list of elite players who will be behind the plate for the team this season.

“I’m looking forward to having our first international player in my tenure as the Sweets manager,” Mutz said. “Willy is a complete player; he’s a solid defender who will hit for average and power. When the staff discussed this offseason what our focal point should be when recruiting, we all agreed catching is at the forefront. As a result, we  have collectively put together three outstanding catchers for this upcoming summer all with plus defending skills.”