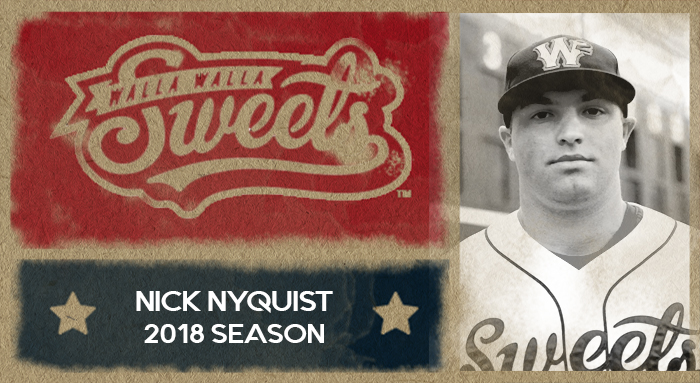 Walla Walla, Wash. – A familiar face will be back on the diamond this summer with the Sweets’ most recent signing. Nick Nyquist (IF/Gonzaga University) is set to rejoin Walla Walla for the upcoming 2018 season.

Nyquist grew up in Coeur d’Alene, Idaho and went to Coeur d’Alene High School where he had an exceptional baseball career. He finished his senior year in 2014 with a .506 batting average, six homeruns, and 34 RBI and was named Idaho Gatorade Player of the Year, Idaho Hall of Fame Baseball Player of the Year, and Inland Empire League MVP. From his sophomore year through his senior year, Nyquist was also named first team All-State and first team All-League.

“It was really great,” Nyquist said of his time at Coeur d’Alene. “We made a good run there and ended up winning the district title five years in a row, all four that I was there. We were really good and just had a good group of guys and a fun atmosphere.”

Nyquist is a redshirt junior at Gonzaga, having utilized his redshirt designation prior to the 2016 season. In the two seasons that he has played with the Bulldogs, Nyquist has appeared in 42 games and has a .238 batting average and a .347 on base percentage.

“I’ve loved every second of [playing at Gonzaga],” Nyquist said. “We have a really good group of guys; it’s a really tight knit group. There’s just a team-first type of atmosphere, and there’s really nothing better than that. It’s just a bunch of selfless guys and we all go out there and do our thing.”

He is the son of Lisa and Mike Nyquist. His father, Mike, played baseball collegiately at Whitworth University and Washington University, then briefly played professionally in the minor leagues. Nick has a brother, Chad, who played college baseball at Spokane Falls Community College.

Nyquist is back for his third year with the Sweets and his fourth year overall playing in the West Coast League. He first played with the Wenatchee AppleSox in the summer of 2015 and then spent the past two summers playing with Walla Walla. He said he keeps coming back to the Sweets because of his love for the coaches and the community.

“They’ve made it feel like home for me,” Nyquist said. “I’ve had a great host family, the coaches are awesome, all you could ask for. The management is awesome, the community is awesome, and the fans are great. I’ve just loved every second there.”

Over his previous two seasons with the Sweets, Nyquist has compiled a .270 batting average, six homeruns, eight triples, 23 doubles, 53 RBI, was named to the WCL All-Star Team both years, and was first team All-WCL in 2017. He said that his favorite part of playing for the Sweets is getting the chance to play night in and night out and credits the team and head coach Frank Mutz with bringing in quality players to play alongside.

“The guys Frank brings in are awesome guys, and they’re really fun to be around,” Nyquist said. “Just being around the team, the atmosphere is really fun, really laid back, and we get to just go out there, have fun and play baseball.”

With the college season already underway and the Sweets season rapidly approaching, Nyquist said he’s excited to compete in the WCL once again this summer and is hoping to bring home some hardware for Walla Walla this time around.

“I’m looking forward to going out there and competing every night and hopefully winning a championship,” Nyquist said. “We’ve come up a bit short from the playoffs these last couple years, so I’m hoping to get it done this year. We have a lot of returners, a lot of great players. Frank always brings in really good arms, so I know our pitching will be there, so we have to hold it up on the hitter’s side.”

Coach Mutz has grown familiar with Nyquist, having coached him with the Sweets over the last two seasons, and said that the Zags infielder will continue to play a key role for Walla Walla this upcoming season.

“I couldn’t be more excited to have Nyquist back for his third season with the Sweets,” Mutz said. “The past two seasons, Nick has been in the heart of our lineup, leading us in most offensive categories and giving us a solid defensive effort every night at third base. As a manager, you look for someone to lead your team both on the field and in the clubhouse and Nick gives us that leadership that we need.”