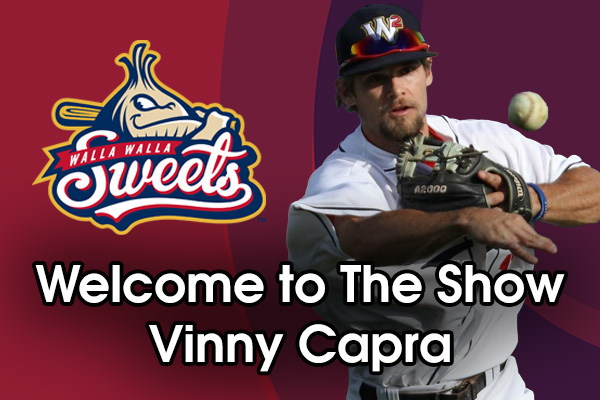 The Toronto Blue Jays announced on Friday the promotion of the 25 year old infielder to their active roster.  Capra, a member of the Sweets 2017 team, becomes the second former Sweets player to make it to the Major Leagues during the 2022 MLB season.  Cooper Hummel of the Arizona Diamondbacks was named to their 26 man roster prior to the start of the league season.

Capra, who attended the University of Richmond, was selected in the 20th round (596th overall) by the Blue Jays in the 2018 MLB Draft.  He has spent five seasons in the Toronto farm system prior to his big league call up.

In 2017 with the Sweets, Capra appeared in 48 games, hitting .291 with one home run, eight doubles, 30 runs scored, while driving in 25.  He also added eight stolen bases on the summer.

This season in Triple AAA, Vinny was hitting .304  in 18 games for the Buffalo Bison’s, adding three doubles, three homers, and 10 runs batted in.

The Blue Jays start a three game home series this Friday, April 29 against the Houston Astros.