Catching Up With Past and Current Sweets Players in College Baseball 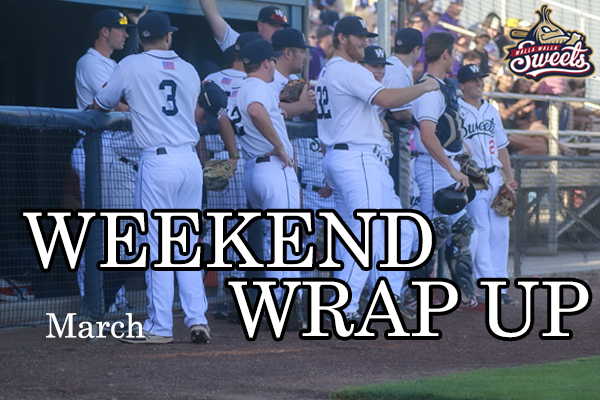 Hey Sweets fans, it’s been a while.

Welcome to a late edition of the Weekend Wrap Up for March!  We’ve got you covered on all things Sweets, past and present, across the college baseball landscape.

So without further ado, here is who stood out in March (and early April!) in this edition of the wrap up.

On fire, en fuego, however you want to say, Leo Rivera is just that right now at the plate.

The incoming Sweet and Whitman College shortstop had a March to remember.  After batting just .158 through the month of February, Rivera has since gone 29 for 80 at the dish for a .363 average over his last 19 games. He also has two homers, seven doubles, two triples, and 19 runs batted in during that time span.

Rivera has also had a flair for the dramatic, delivering in clutch situations for the Blues when they’ve needed it most.  Against Willamette on March 26, he provided the game winning single to walk off the Bearcats for a 7-6 comeback win.

He provided more heroics this past weekend against in-conference opponent Pacific Lutheran, delivering a walk off two run home run to win the game and clinch the series win for Whitman.

🚨 WALK OFF🚨
Leo Rivera with the pinch-hit, walk off 2-run HR to give Whitman the W in game 2 of today's DH vs PLU.

Get Out the Mustard and Rye Bread, Grandma!

The late, great Dave Neihaus would have enjoyed watching Will Fuenning play this past weekend.

Quite simply put, Fuenning put on a show during West Texas A&M’s series against Angelo State.  In four games, the incoming Sweets outfielder was 7 for 13 at the plate, driving in 12 runs with one double and four home runs.

Fuenning’s second grand slam proved to be the eventual game winning hit.  His feat was so…grand…that it left the broadcast booth almost at a loss for words.

The Aggies would win the game 7-3 as they took three of four games on the weekend from the Rams.

Fuenning continues his stellar season, where he is batting .362 with seven home runs, 10 doubles, two triples, and 45 runs batted in for West Texas A&M, who now sit 30-7 on the season.

Richards Among The Best In NWAC

Coby Richards is putting together a very impressive 2022 spring season.

The Yakima Valley College freshman has been the steady hand for the Yaks all year on the mound.  The right hander is 4-0 in seven starts in conference play, striking out 32 batters in 42 ⅓ innings of work and posting an outstanding 1.70 ERA.

His most impressive outing came in a March game against Southwest Oregon, where Richards went six innings, striking out nine while allowing just one run on two hits.  The performance helped Yakima to a 6-2 win on the day.

Richard’s 1.70 ERA currently ranks fifth in the Northwest Athletic Conference among eligible pitchers.  He is also ranked in the top 10 in the conference in walks, allowing just eight free passes in conference play.

Richards is solidified as one of the top arms in the rotation for the Yaks, who currently sit at 17-11 on the year.  Conference play continues this week against Walla Walla Community College, where Sweets fans have the chance to see the incoming Sweet on Saturday when Yakima visits the Warriors for a double header on Saturday, April 16.