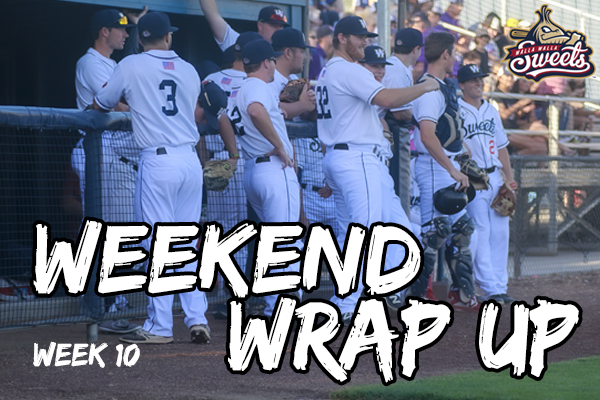 We now enter our last Weekend Wrap Up of April!

It is hard to believe we are now in week 10 of the college baseball season.  With playoffs and summer ball for many student athletes in sight, schools are putting the finishing touches on their resumes before the end of the season.

Let’s dive into the latest on this week’s edition of the Wrap Up..

Traditionally a starting pitcher, Travis Craven has recently been coming out of the bullpen for the Whitman College Blues for the 2021 season.

On Sunday, it was back to the bump in a starting role.

Starting his first game on the mound since March 6, the Sweets signee took the ball for the Blues against visiting George Fox.  The veteran left hander was in a groove all afternoon, going the distance with a 9 inning performance where he allowed just 2 runs on 6 hits while striking out 11 batters.  The Blues would defeat George Fox by a score of 6-2.

Craven would pick up the win, his first as a starter on the season and his third overall in 2021.

The win helped the Blues take three of four games over the weekend against George Fox, as Whitman brought their record back to .500 on the season.  Looking to build off the strong weekend, the Blues next go on the road to Pacific for a four game series next weekend before finishing their 2021 regular season at home against Puget Sound on May 8-9.

Cal Baptist right hander Matt Amrhein is used to coming out of the bullpen for the Lancers to help close out games.  On Sunday, the senior took the ball for the start against Utah Valley, his first since 2019.

And he turned in quite the performance.

Amrhein shined, going 7 ⅓ innings allowing just 2 runs on 2 hits and striking out 3, picking up the win as the Lancers took the game with a 6-2 win.  The win was Amrhein’s third of the season, and first in a starting role.

Amrhein is one of the senior leaders on the Lancer’s pitching staff this season, and the 2017 Sweets alum is leading by example this year.  He sports a 3-0 record with an impressive 2.60 ERA in 34 ⅔ innings of work on the season.

The Lancers are now top of the Western Athletic Conference, with a 25-11 overall record and a 17-3 record in conference play.  Cal Baptist looks to hold onto its spot atop the conference when they go on the road next weekend to face Seattle University.

At this rate, Brock Ephan will be making a claim for most featured mentions on the Wrap Up over Isaac Esqueda.

If he continues his play from this past weekend, it won’t be long before he does.

Playing in all four games against the visiting College of Idaho, the Lewis-Clark State College senior went a combined 9 for 16 at the plate with 11 RBI, 2 doubles, and added 4 more home runs to his season tally.  The Warriors would win all four games on the weekend.

Ephan, a 2019 Sweets alum, is putting together an incredible season at the plate for the Warriors.  He has now raised his average up to .384 on the season with 15 home runs, 56 RBI, and 14 doubles.  Always a featured part in the middle of the lineup for the Warriors, Ephan is on pace to have his best season at LCSC since his arrival in 2017.

The Warriors finish up their season next weekend in a four game series when they visit Eastern Oregon.

Bellevue College freshman pitcher Jacob Dahlstrom picked up the win in game one of Friday’s double header against Skagit Valley.  The Sweets signee went 6 innings, allowing just 1 run on 2 hits while striking out 6 in the Bulldogs 6-5 win.

Cal Baptist first baseman John Glenn (Sweets 2017 alum) went a combined 11 for 14 at the plate over the weekend against Utah Valley.  The senior also drove in 4 runs while adding a double and a home run in the series as the Lancers won all four games.

Sit on back and take another look at this John Glenn blast. #LanceUp⚔️ pic.twitter.com/B2tIReLL15

Sweets signee Jordan Stubbings started all four games for Colorado Mesa against New Mexico Highlands over the weekend.  The junior infielder went a combined 5 for 14, with a home run and 4 RBI as Colorado won all four games.

New Sweets signee Will Grimm also pitched for LMU this weekend against Pepperdine.  The freshman pitched a scoreless inning, striking out 2 and picking up the win in LMU’s 5-4 win on Saturday.

Pepperdine freshman right hander Dylan Schwartz pitched twice this past week.  The Sweets signee had his best game Saturday, going 1 inning of scoreless work against LMU in a 5-4 losing effort.

Point Loma Nazarene freshman Seth Ryberg started three of four games for the Sea Lions over the weekend.  The Sweets signee went a combined 5 for 13 at the plate, driving in 3 runs and adding a double.

Saddleback community college outfielder Nation Wood played in three of four games this past week.  The Sweets signee went a combined 7 for 12 at the plate, with 6 RBI, a triple, home run, and a stolen base.