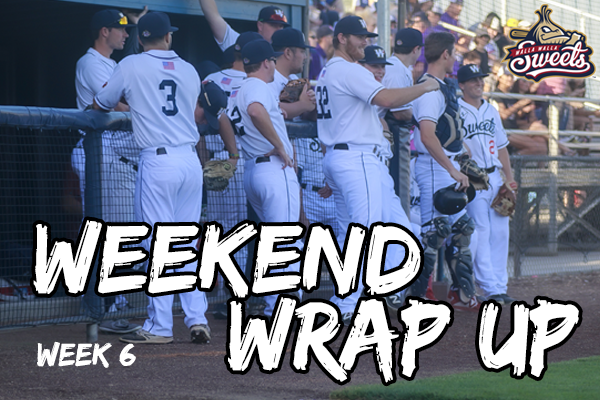 Another week of college baseball is in the books.

With teams now entering the middle of their season schedules, many schools have begun conference play.  Several former and current Sweets matched up against each other as a result this weekend, providing for another action packed week.

Read all that and more in this week’s edition of the Wrap Up.

Spencer Schwehr was a man on a mission Saturday.

The sophomore left hander took the ball for the Northwest Nazarene Nighthawks in their second game of the double header against the St. Martin’s Saints and proceeded to put on a pitching clinic.  Schwehr pitched a complete game, going 7 innings allowing just 1 run on 3 hits while striking out 6 (NCAA rules limit the second games of back to back doubleheaders to 7 innings).

The Sweets signee picked up his third win of the season, as he helped the Nighthawks complete the four game series sweep of the Saints over the weekend with an 8-1 win.  Schwehr lowered his ERA to 2.29 on the season and has only allowed only 1 run over his last 12 ⅓ innings of work.

NNU continues its winning ways, as they improved to 17-3 on the season and 11-1 in conference play.

For the Cal Baptist Lancers this past weekend, John Glenn provided the offense while Matt Amrhein supplied the pitching.

The result was a four game series sweep for the Lancers over the visiting Tarleton State Texans,  And the former 2017 Sweets duo was right in the middle of all of it for Cal Baptist.

Starting with Glenn, the senior first baseman was driving in runs and coming up with big hits all weekend for the Lancers.  He would finish the series going a combined 7 for 14, with 2 home runs, 8 RBI’s, and 3 runs scored.

The big weekend brought Glenn’s batting average up to a solid .290 for the season, along with 18 RBI’s and 3 home runs.

Amrhein meanwhile was putting in work on the mound.

The senior right hander came on in relief of the second game of Saturday’s double header, going 4 ⅔ innings while allowing just 3 hits, 1 walk, and struck out 6 without surrendering a run.  Amrhein would finish out the game and pick up his first win of the season, as the Lancers would win 7-3.

Matt Amrhein gets the win in relief after throwing the final 4.2 innings. He allowed just 3️⃣ hits, 1️⃣ walk and tied his career-high 6️⃣ strikeouts.#LanceUp⚔️ pic.twitter.com/WsDBj93iC1

The outing helped lower Amrhein’s ERA to a 2.87 mark, and he has now struck out 18 batters in his 15 ⅔ innings of work on the year.

Cal Baptist is now 15-6 on the year and now a perfect 8-0 in conference play this season.  They look to continue their hot streak next weekend against UT Rio Grande Valley.

Brock Ephan picked up right where he left off last weekend.

The power hitting infielder started things off with a bang in game one of Saturday’s double header, going 2 for 3 with 2 home runs and 4 RBI’s for Lewis-Clark State College in their 12-1 win.  And it was a sign of things to come.

Ephan would finish the weekend 6 for 14, driving in a total of 8 runs to go along with his 2 home runs, and added 6 runs scored as LCSC would sweep the four game weekend series against Eastern Oregon.

Lewis-Clark State College are now an impressive 22-2 on the year, including 15-1 in conference play.  They look to continue their dominance next weekend when they visit Oregon Tech.

Sophomore Jacob Blas (Sweets 2017 alum) drove in 4 runs across four games this past week for the University of Arizona, as the Wildcats went 3-1 on the week.

University of California junior right hander Sean Sullivan (‘18) started and went 4 innings in Saturday’s game against the University of Utah.  He allowed 3 runs on 6 hits while striking out 2 in Cal’s 9-5 win.

Sweets signee Mason Kokodynski pitched in two games this past week.  The freshman right hander went a combined 3 innings of work, allowing just 1 hit while striking out a hitter and didn’t allow a run in either of his appearances.

Sophomore Carson Green (‘19) had a hit in each of his four games this weekend against Western Oregon.  The Montana State Billings infielder also drove in 4 runs, adding a double, triple, and a home run to his season tally.

Sweets signee Nick Irwin pitched 1 ⅔ innings of scoreless ball for NNU in game one of Friday’s double header.  The right hander allowed no hits and struck out 2.

Senior Ben Johnson (‘19) picked up his third win of the season in NNU’s game one of Saturday’s double header.  The right hander went 5 innings and allowed just 1 run on 1 hit while striking out 3 in the 8-4 win for the Nighthawks.  Johnson also produced at the plate, going a combined 3 for 10 on the weekend with an RBI.

Junior Reid Sebby (‘19) pitched 2 innings of relief for the Oregon State Beavers this past Tuesday against Santa Clara.  The right hander allowed no runs on no hits and struck out a batter in the Beavers 10-9 loss.

Pepperdine freshman Dylan Schwartz picked up his first collegiate win this past Tuesday.  The Sweets signee pitched 3 innings of relief, allowing just 1 run on 4 hits while striking out 6 in a 14-5 winning effort.

Senior Patrick Caulfield (‘18-’19) was a combined 2 for 3 on the weekend for UCLA, including a two run home run in Sunday’s 13-1 dismantling of USC.

UCLA freshman Emanuel Dean (‘19) had his best game in his young career this past Tuesday.  The outfielder went 4 for 5 with 4 RBI’s in the Bruins 13-6  win against LMU.

B1 | The Bruins have batted around here in the first to eliminate the early deficit, scoring five runs including two on this Emanuel Dean triple!

Junior Isaac Esqueda (‘17) was solid again in his outing against UCLA Friday.  The left hander went 6 innings and allowed just 2 runs on 6 hits while striking out 5.  Esqueda was given a no decision as the Trojans would rally in the 9th to win 5-4.

MID 5 | Esqueda catches another Bruin swinging! Trojans get out of it with a groundout and fly out as the Bruins leave 1 on base

Western Oregon right hander Mike Peterson (‘18-’19) picked up his second win of the season on Friday.  The senior went 6 innings, allowing 1 run on 3 hits while striking out 2 in the Wolves 9-2 win over Montana State Billings.