Connor returns for second season with the Sweets 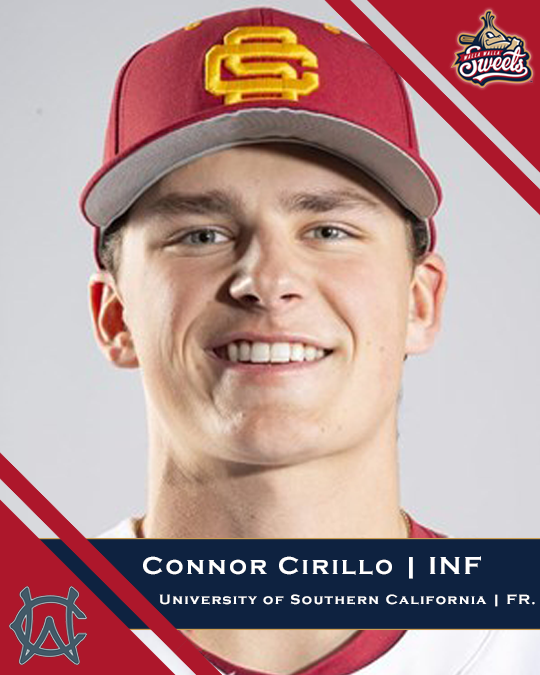 Last season, Connor Cirillo got his first taste of collegiate summer baseball with the Walla Walla Sweets while his father, Jeff, rooted for him from the stands.

This summer, however, the two will share the field as Connor will be managed by his dad.

While father-son combinations in sports present challenges, Connor said he is embracing the opportunity to be coached by the two-time MLB All-Star.

“My dad was always my coach all of my childhood, so it will be nice to have the childhood-like connection that we built over the years,” Cirillo said.

Connor is already following in the footsteps of his dad in multiple ways. The younger Cirillo recently concluded his freshman season at USC, which was Jeff’s alma mater.  They both had decorated high school careers as well, with Connor playing four varsity seasons at Bellevue High School while sporting a .300 career batting average during his prep career.

Connor said that his father and siblings attending USC played a role in his decision to attend the school, and that he had his sights on it since his freshman year of high school. He also said his first season at USC was beneficial in many ways.

“All around, USC has a great environment and all the guys were incredibly welcoming to the new guys,” Cirillo said. “On top of that, Coach Gill and the rest of the staff prepared us to beat teams like Vanderbilt and TCU.”

While this will be the first season on the Sweets for Jeff, Connor will make his second stint at Borleske Stadium. As a freshly-graduated high school senior last season, Connor hit .278 in the West Coast League for Walla Walla.

The younger Cirillo said that having the opportunity to play against bigger and older players helped to prepare for his collegiate season.

“Competing with guys up to six years older than me and to see the physicality some dudes had was a good opener for myself,” Cirillo said.

The Cirillos have shared a strong love for baseball their entire lives, and now have the chance to build upon that passion at the college level. Jeff played a major role in Connor’s liking to baseball when the latter was a young kid. Jeff’s time in the big leagues helped Connor start to gravitate toward the game, especially when the elder Cirillo threw batting practice to his sons at major league ballparks. While Jeff introduced him to the game, Connor said his own desires and work ethic took precedent in pursuit of his baseball career.

From a managing standpoint, coaching your son can be difficult, but Jeff said he and Connor understand that all players need fair treatment.

“All of the players I have ever coached seemed to gravitate toward transparency and being fair and keeping them accountable,” Cirillo said. “I would be doing him and the team a disservice if I didn’t coach him the same way I would coach any other Sweet.”

With the season opener just over a month away, Connor said he is excited to get back to baseball and return to Walla Walla.

“I really hope the Sweets will be able to play in the near future,” Cirillo said. “Hopefully some Cirillo magic will be shown in the summer!”