Yardley, a member of the division-winning 2011 club, was called up by the San Diego Padres 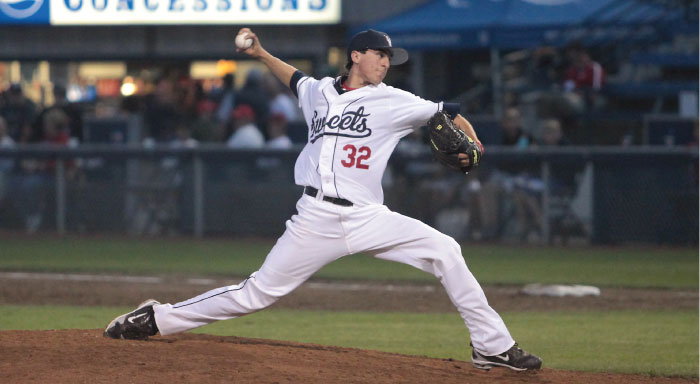 In most cases, it is seen as a slight. In this case, it is used as a positive adverb to highlight the tenacity, will and talent it takes to not be selected by an MLB team – go the independent route out of college – and be able to pitch in a regular-season Major League Baseball game.

Today, Eric Yardley became the second former Walla Walla Sweet to get called up to the Major Leagues, when the San Diego Padres selected his contract from El Paso of the PCL. He joins Matt Hall, who is currently with the Detroit Tigers.

Yardley is a local product – from Richland High in the Tri-Cities – and pitched for Seattle U when he came over to Walla Walla to pitch for the 2nd-year Sweets. That season, the club stunned powerhouse Wenatchee AppleSox in the playoffs, winning the division and reaching the WCLCS. He struggled that year – on a team that had nine pitchers with sub-2.50 ERA, it was difficult for him to find success. In fact, the team opted not to re-sign him for the 2012 campaign.

“Than he goes to Klamath Falls, he had developed his submarine style that he had started experimenting with in Walla Walla, and he just dominated us,” said team president Zachary Fraser, who was the GM at the time. “Looking back, he was definitely one that we missed out on in year 2.

“But his story is fantastic. Not drafted, signed to the Pecos League, and now 6-7 years later in the minors finally earning his way to the big leagues? How do you NOT root for a guy like that?!”