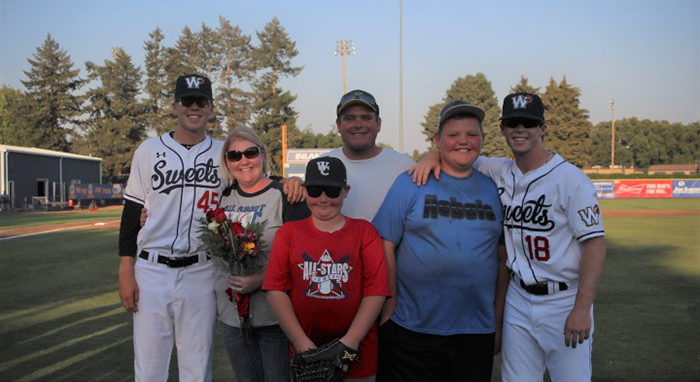 WALLA WALLA – For Jacqueline Mings, Carol Gentzler, and Ruth Hamilton, being a part of families that host Walla Walla Sweets players during the West Coast League baseball season seems to be a labor of love.

One could surmise that they and their loved ones epitomize what being host families is all about.

Hamilton, a family host since the Sweets inception, has entertained the likes of Nick Nyquist (2016-18) and Kalani Brackenridge (2012), as well as current major leaguer Matt Hall (2013) of the Detroit Tigers. She believes the most important things to know about hosting is that the players come to Walla Walla to be a part of a team and continue to hone their athletic skills through the summer.

“As a host, I feel that along with helping with housing, transportation and feeding them it is our responsibility to encourage and support them during this part of their journey,” Hamilton said. “Sometimes it’s easy. Sometimes it is hard. But either way, if you are lucky, when the summer ends you have gained great memories, another family member, and often their family becomes your family as well.”

Gentzler, a host since 2012 who has housed such Sweets as Willy Chang and Haydn King, said the summer relationships are ones to be treasured.

“Each year has been as special as each player, and each player is now a special part of my life,” the host lovingly known as “Grandma Carol” said. “I believe it is the same for each host family. The children in a family love their guys and each family is different, as is each player.”

Mings and her family have hosted Sweets players for two seasons including 2018. She said the experience has positively impacted her and her husband, and their two boys.

“My oldest son has been a bat boy during the last two summers and connected with the players each year,” Mings said. “My youngest is notorious for hanging out in the rooms of his “summer brothers” and scratching rides home with the boys after the games. These experiences make us want to continue because within our hearts, we have more to give.”

Mings said being a host family “brings a new light, new laughs, lots of cheer, tons of joy, new friendships, and extra cowbells during the season.”

She added, “This is an incredible opportunity to be given and we encourage others to participate…if you have the room in your home, and your heart.”

More information can be obtained by contacting the Sweets at 509-522-BALL.