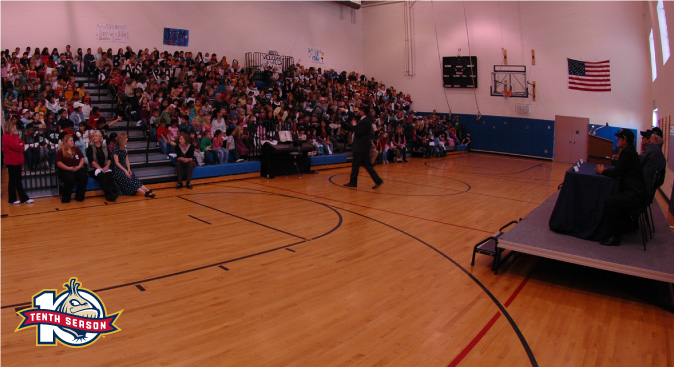 For railroad aficionados, this mental image will make sense.

Railroad routes are determined and changed with simple switches. If a train takes off from San Francisco heading to New York City, the path is set. At each stop along the way, switch operators make sure the iron tracks are shifted just so, in order to ensure that train makes it to the Big Apple. However, a slight switch change – just a few inches – in, let’s say Kansas City, would mean that train could now end up in Miami – more than a thousand miles away from the desired destination.

There are a few points in one’s life that, like the simple switch of a track on a railroad, seem small but become monumental in terms of determining the direction a life will go. In the case of the actual train – ending in Miami when the plan called for New York City – could be catastrophic. In life, it often becomes a significant and unplanned blessing.

On a sunny Thursday, in front of more than 400 young students in an historic schoolhouse (the number has grown over the decade – like a fishing story – but the size of the classes, the number of teachers and the available space in the gym force me back to reality), my life reached that monumental switch on the tracks. A life trip that was speeding towards a life in a market like Seattle, or Dallas, or Philadelphia – big city, big league – became a life defined instead by life, love and service in a small farming city with the coolest people in the world.

Nine years ago today (11/12/2009), I joined my (now) partners on a stage at Sharpstein Elementary School in Walla Walla, Washington to introduce a team name, a brand, and a manager. We picked Sharpstein as the home of the launch for two simple and selfish reasons: 1) It was proving to be nearly impossible to attract more than a few dozen people to a press conference in a town that didn’t have very many of these types of events (at least up to this point)…and 2) my son was a new kindergarten student at a new school in a new town – I wanted to give him a reason to be the “cool” kid. It helped that Sharpstein was an iconic, historic and beautiful schoolhouse that channeled the zeitgeist of the city. And this all worked!

Every. Single. Student at Sharpstein was packed in the gym (and teachers and administrators and random community members)! The principal, Laure Quaresma (now the superintendent for Athena-Weston schools) was so gracious and supportive of our effort to engage the community. The teachers – particularly music teacher Lori Parnicky – bought in, and students all wore “baseball gear”. It was remarkable. We outfitted each student with a “I WAS THERE!” rally towel, and they responded! A student-led version of the national anthem (by a young woman who would eventually work for the team), “Take Me Out to the Ballgame” and other baseball-themed songs filled the air. Signs were made, faces were painted – it was a carnival more than an assembly or a press conference, and it was perfect.

We certainly looked younger. One of partners, Jeff Cirillo, was less than 2 years removed from finishing a distinguished Major League Baseball career, one that allowed him to appear on the ballot for the Baseball Hall of Fame and an inaugural member of the Milwaukee Brewers Wall of Honor. I was barely 30, and Biagi still had hair. It was a fantastic group who really believed that we could make baseball work in the Walla Walla Valley.

SEE OUR FACEBOOK PHOTO GALLERY OF THE DAY HERE

Following the celebration, we headed to a new joint in town, the Red Monkey (crazy to think that the Red Monkey and the Sweets launched in the same year…) and reveled for a few minutes. The reveling immediately turned to a realization of the amount of work still left to address in order to be ready for June 8, 2010 vs. the Wenatchee AppleSox. The switch on the track had been thrown, and the train was speeding quickly towards baseball. After we paid the bill, we rolled up our sleeves and got immediately to work.