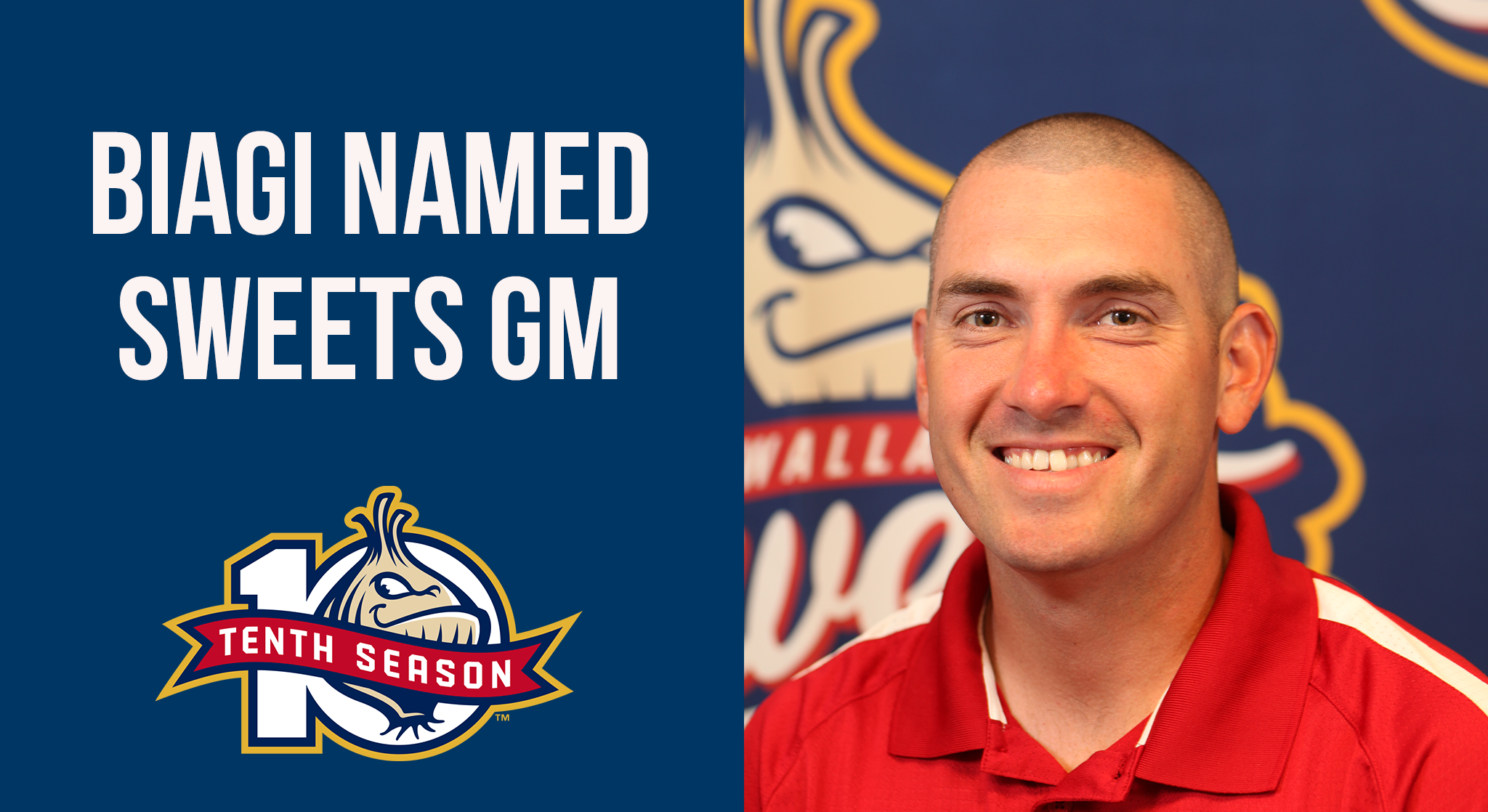 Over 9 seasons, the Sweets have blossomed into the place where summer memories are made in the Walla Walla Valley. A pioneer to that success is returning to the team as the general manager.

J.C. Biagi, who was hired by team president Zachary Fraser to serve as the inaugural manager of the Sweets for the 2010 season, and was later Fraser’s assistant GM from 2011-13, is returning to the team to serve as the General Manager.

“I’m beyond excited to be back with the Sweets in such an exciting time for the organization,” said Biagi. “It’s an honor to take the reigns in our tenth season. I learned so much in my first five years with the Sweets, even more in starting and running my own business, and I can’t wait to be back in the ballpark on a nightly basis, in a different role – and I certainly hope will not involve as many ejections!”

“I am excited to welcoming my friend back to our team,” said Fraser. “He knows what has been done to build the Sweets in the community over the past decade, he has talent in leading successful businesses and teams, and he brings new strengths developed in his time away from the Sweets that will make us even stronger in the future.

“From building desks, clubhouses and rosters together in the early years, to now working on the next decade of Sweets baseball – I am personally energized to have him back on our team, and it will be fun to work alongside him during games where I am not escorting him from the dugout to the clubhouse.”

Biagi was the on-field manager of the Sweets from 2010 through the 2014 season. As the manager, he led the club to two WCL playoff appearances, including a 2011 WCL Championship appearance. He saw dozens of players that he managed be selected in the MLB Draft, and was at the helm when Matt Hall (2013) pitched for the Sweets. Earlier this month, Hall became the first former Sweet to make the Major Leagues when the Detroit Tigers called him up from AAA Toledo. Biagi was born and raised in the Walla Walla Valley, and played baseball at both DeSales and Walla Walla Community College before completing his playing career as a NCAA Division I pitcher at Centenary (LA).

In addition to his coaching responsibilities with the Sweets, Biagi worked closely with Fraser as the assistant GM (when Fraser was serving as the GM) to establish Borleske Stadium and Sweets baseball as the place to be on summer nights in the Walla Walla Valley. The two built the desks that are still used in the Sweets offices, and spent many a late night trading ideas that developed into the traditions the Sweets fans enjoy today.

His business building continued after he stepped away from the dugout. Biagi and his wife, Katie, founded Wonderboy Creative, a full-service creative and marketing agency based in Walla Walla. His combination of business and baseball development, along with his passion for the roots of the team, positioned Biagi to be a wise local choice to work with Fraser in charting the next decade for the Sweets.

The Sweets and Wonderboy have enjoyed a unique partnership – primarily through work on the teams digital and creative assets – and that will continue. While remaining a partner in Wonderboy, Biagi will hand off day-to-day management to the team that he has helped assemble there.

As the GM of the Sweets, he will have day-to-day responsibility in managing ticket sales, business development, stadium operations and baseball operations, including working with manager Frank Mutz to construct the roster. Given Biagi’s history with the team, and Fraser’s continued role of overall management of Pacific Baseball Ventures interests, it is exciting to think what can develop with the refreshed version of this partnership.

“Our energies and skill sets compliment one another,” said Fraser. “Over the past few seasons, he has stayed close to the team, has a great relationship with Frank and the front office – I cannot wait to work with him again in this capacity.”

“I look forward to bringing energy, a refreshed perspective and fun to the ballpark each night in a different capacity than I enjoyed the first time with the team,” Biagi said. “From the dugout, I was always grateful for our fans’ support, and it’ll be a joy to get to know them and serve them in this new role.”