Sweets add three members of the Wolf Pack for 2018. 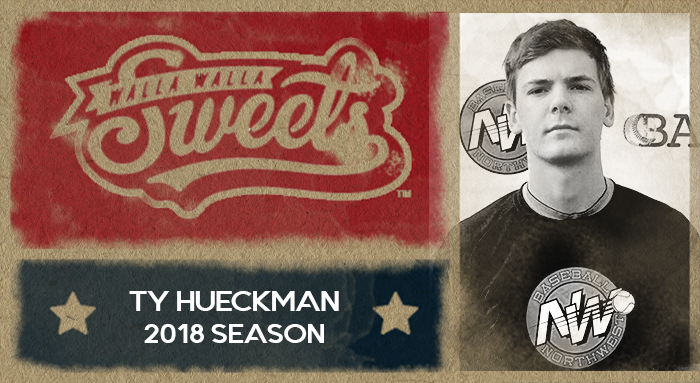 Walla Walla, Wash. – There may be some howling at the moon on the diamond for the Sweets this season as the team has added three talented players from the University of Nevada, Reno Wolf Pack. Sophomore Ty Hueckman (RHP), freshman Josh Prizina (C, 1B, OF), and freshman Tanner Cunha (LHP) will suit up for Walla Walla this upcoming season.

“I’ve always known about the Sweets because they’re pretty close to home, so that was definitely a team that stuck out for me” Hueckman said. “There’s a bunch of Nevada players that have played [with the Sweets] that told me about it and it sounded like a ton of fun and they all loved it.”

“I decided to join the Sweets to have the collegiate competition over the summer,” Cunha said. “It will help get me prepared for UNR with Division I athletes and studs on the field at all times.”

A native of Burns, Oregon, Hueckman was a three-sport athlete at Burns High School playing baseball, basketball and football. He spent his first year of collegiate action playing for Treasure Valley Community College and had an impressive season. He finished with a record of 5-1 and a 2.42 ERA with 31 strikeouts in 67 innings pitched.

“It was awesome [playing for Treasure Valley], having grown up always watching the Chukars play,” Hueckman said. “It was a dream come true getting to put on a college uniform and throw.”

Hueckman transferred to the University of Nevada, Reno in the fall of 2017 and said it was a huge transition moving to a larger school but that he’s much more comfortable now. He loves the community of Reno and the baseball team. He said that being familiar with Walla Walla growing up, he’s excited for the opportunity to play for the Sweets this season.

“I love Walla Walla,” Hueckman said. “I go through there a ton and spent a lot of time there, so I feel like I can go in there and be comfortable and still be close enough to home to have friends and family come to games. So, it seemed like a good spot for me.”

Prizina grew up in Sparks, Nevada where he went to Spanish Springs High School and had an exceptional career in both basketball and baseball. The 6-foot-6 athlete was named 1st Team All-Region three times for basketball and twice for baseball. His senior year, he was tabbed as the Male Athlete of the Year by both the Reno Gazette Journal and the Sparks Tribune in addition to taking home 1st Team All-State honors for baseball. He finished his career on the diamond for Spanish Springs with a .428 batting average, 16 homeruns, and 95 RBI.


Prizina followed in the footsteps of his mother, Chris, and his uncle, Jim Puzey, who both attended the University of Nevada, Reno and played softball and baseball respectively. He said getting the chance to play for the Wolf Pack was an opportunity he could not pass up.

“Growing up in the community, I knew the environment and I knew this was a town that couldn’t be beat,” Prizina said. “So to get a scholarship was a dream come true. I took it the second he offered, and it was just a dream come true.”

Prizina became familiar with the Sweets because his good friend from high school, Ryan Anderson, played for the team in the summer of 2016. It was because of Anderson’s high praise for the team that Prizina was persuaded to become a part of the Sweets.

“[Anderson] said it was the time of his life, and he said if there’s anywhere you can go, try to get to the Sweets because they’re a really good program, the community rocks, and he loved his host family as well,” Prizina said. “I thought that was something I could potentially see myself doing, so once my coach brought it up that I was going to Walla Walla, I was super excited.”

Cunha is a native of Sacramento, California and had an outstanding high school career at Christian Brothers High School. The left-handed hurler threw a 6-inning perfect game against a rival school his senior year and earned several accolades including 1st Team All-City, 1st Team All-NorCal, and Medium Schools 1st Team All-State. He also helped propel Christian Brothers to their first ever section title for baseball, throwing a complete game and striking out six in the championship.

Cunha is currently attending Sacramento City College, but will transfer to the University of Nevada, Reno in the fall. He said that junior college was always a possibility coming out of high school because he had been underestimated due to his small size on the mound and not having the velocity you might expect out of an ace. But Cunha’s ability to command the zone and throw strikes caught the eye of the Wolf Pack coaches late into the summer of 2017, and he will now can prove himself at the Division I level.

With his first collegiate season approaching, Cunha said he feels that his experience with Sacramento City will benefit him both mentally and physically because of how the baseball program works to develop its players.

“They help you to realize it’s more than a game of baseball,” Cunha said. “They help you with life and how to deal with the bad stuff that happens both on the mound and in life, so being here so far has shown me a lot about my character as a baseball player and my character off the field.”

Cunha will join a strong staff of pitchers for the Sweets in 2018 and he said he’s excited for the opportunity to meet and gel with his new teammates.

“I’m looking forward to developing the team camaraderie, going as far as we can in the playoffs and hopefully winning it all,” Cunha said.

Sweets management is anxious to continue to grow the relationship with the Wolf Pack.

“Coach (T.J.) Bruce and his staff at UNR continue to be a great partner in securing players that make a strong addition to our club,” said Sweets president Zachary Fraser. “We look forward to Ty, Josh and Tanner being key components of a run to a championship this season.”