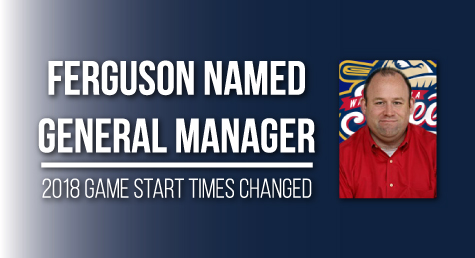 Walla Walla, WA – The Sweets have named a new general manager, promoting assistant general manager Dan Ferguson to the post for the 2018 season. Team president Zachary Fraser, who had returned to the GM role for the 2017 season, is continuing on in his role as president of the Sweets and the Yakima Valley Pippins. Both WCL clubs share the same ownership.

“Since Dan has joined the Sweets front office, ticket sales have increased by nearly 40%,” said Fraser. “That kind of performance is significant. He has been instrumental in improving the day-to-day operations of the team, and allowing me to continue to build the brand and the fan allegiance in the Walla Walla Valley.

“I’m thrilled for him to take this next step with our team.”

Ferguson, a WSU graduate and native of Seattle, joined the Sweets after serving as the Director of Ticket Sales for the Richmond (VA) Kickers of the USL. He has more than a decade of sports management experience, including stops in Seattle, Sacramento, Washington D.C., and St. Paul, MN. He will continue to oversee ticket sales and operations and now assume the day-to-day operational charge of the Sweets front office. Ferguson will work with Fraser and manager Frank Mutz in construction and oversight of the roster for the 2018 season. He will be the third general manager in team history, following Fraser (2010-2013,’17) and Katie Biagi (2014-16).

“I’m excited to continue and grow my role in the Walla Walla Valley,” said Ferguson. “Since arriving in 2015, I’ve been warmly welcomed by the team and the fans in #SweetsCountry, and I’ve made Walla Walla my home.

“We’re already deep into work and preparations for the 2018 season, and expect our ninth campaign to be the best we’ve ever had.”

2018 will represent the Sweets ninth season at Borleske Stadium – the longest run of a professionally-operated team under one ownership group in the history of the community.

NEW START TIMES FOR 2018: As the general manager, one of Ferguson’s first orders of business is the changing of standard game times for the 2018 season. The team will still have gates opening at 6 P.M., but first pitch will move to 6:35 PM, instead of the 7:05 P.M. that has been in place since the 2010 season. Sunday games will move to a 4:35 P.M. start instead of a 5:05 P.M. start. Special times for select games will be determined and publicized with the release of the 2018 schedule.

“After receiving feedback from our community roundtable, our core fan base and seeing the results of our post-season survey, these changes to start times reflect what is the overwhelming majority of responses,” said Ferguson.

“That 30 minutes means that families with children can make it longer into the game without a meltdown, that people who have to work early the next day don’t have to miss our exciting comebacks in the later innings, and it will make it easier on our players and staff to not be at the ballpark so late into the evening.”

It is anticipated that the West Coast League 2018 schedule will be released later this week. The Sweets will be preparing the promotional schedule and release for later this off-season.